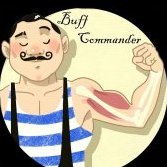 By buffcommander, December 8, 2019 in Escape From Tarkov